Mark joined Selway in 1996. His work experience includes general management, tax accounting, brokerage, portfolio management, and securities analysis. Prior to joining Selway, Mark worked as a stockbroker in the Boise office of D.A. Davidson & Company from 1995-1996, and he managed Matsko Capital Management, a small private investment firm, from 1990 – 1995.

Before entering the investment business, Mark worked as a tax accountant in the Boise office of Arthur Andersen from 1981-1983, and held several positions with Coca Cola of Great Falls, Montana, including President, from 1983 until he negotiated the sale of that firm in 1986. Mark was a private investor between 1987 and the formation of Matsko Capital Management in 1990, except for a brief period as a securities analyst with Growth Stock Outlook from 1989-1990.

Mark is active in civic and social affairs in Boise. He is a former Board Member of the United Way Treasure Valley, and he is the former director of the University of Montana Alumni Association. Mark is also a member of the CFA Society Idaho.

Mark was raised in Great Falls, Montana, and he graduated with High Honors with a B.S. in Accounting, Economics and Political Science from the University of Montana. He holds the professional designation of Chartered Financial Analyst (CFA), and he is a former Certified Public Accountant (CPA). 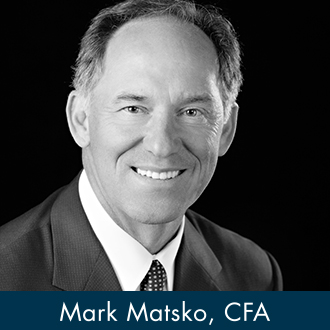